Hangul, An Alphabet Unlike Any Other

Hangul is unique among alphabets in multiple ways, including the fact that it has its own day of celebration. On October 9th, South Korea commemorates the approximate day in 1446 when King Sejong published the newly developed set of characters for his people. Unlike most alphabets which developed slowly over time, Hangul was deliberately invented to respond to the illiteracy in Korea at the time.[1] This deliberate approach to the invention of Hangul means that it is purposefully easy to use and understand, while other alphabets can seem more complicated or haphazard. The historical context which gives birth to Hangul is as fascinating as the language itself.

As a language, Korean existed far before its alphabet. Like all languages, it changed over time due to a variety of influences and historical circumstances. Korean is one of the world’s oldest living languages, and is most likely a distant relative of the Ural-Altaic family of languages. This language family also includes Mongolian, Finnish, and Hungarian. Korean is similar to Japanese in some ways, but is still distinct. Ironically, Korean is not linguistically related to Chinese, which served as an important motivator for Hangul’s eventual invention.

China and Korea would have had contact with one another from time immemorial. Archeological evidence confirms that Chinese refugees arrived in Korea in the 4th century BCE. Later, the Chinese Han Dynasty established four military colonies in North Korea between 206 BCE – 220 CE.[2] Chinese influence and relations with Korea trickled down through the centuries. All the while, Chinese literature, music, religion and government influenced Korean culture. The elite members of Korean society were especially influenced by Chinese culture and embraced it to demonstrate their wealth and class.[3]

A Language With No Alphabet 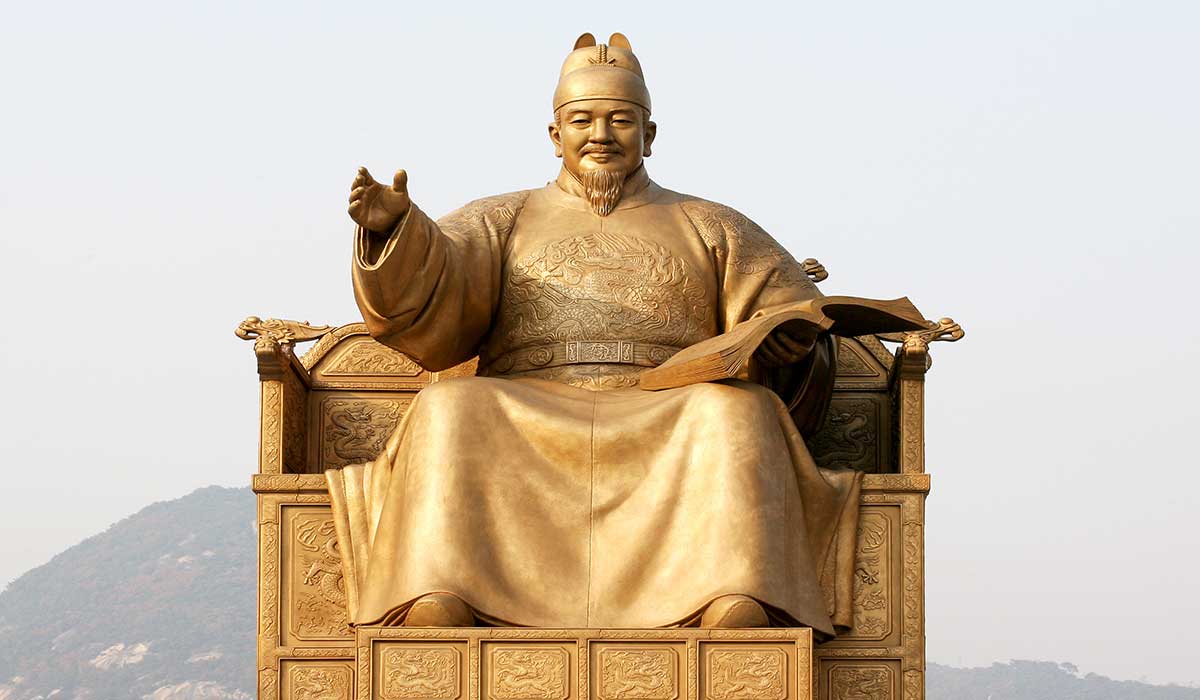 This ongoing relationship through time meant that Chinese words made their way into the Korean language despite the fact that Korean is fundamentally classified as a “language isolate.”[4] In fact, up to 65% of Korean vocabulary has Chinese origins. These words are known as Sino-Korean, meaning they are either Chinese loanwords, or new Korean words that were expressed with Chinese characters.[5]

The result of Korean being a unique language and yet having been so powerfully influenced by the Chinese language was a complicated writing system known as Hanja. Hanja was the product of Korean people who wanted to record their thoughts but had no alphabet. In response to this need, they repurposed Chinese characters to express Korean words. This system began to be used as early as 400 BCE.[6] This system of writing was somewhat complicated, and never quite served to express the Korean ideas or sounds adequately. This was because Chinese characters were not meant to express Korean words. Additionally, only the elite members of Korean society could afford the time to learn Hanja. This meant that many of Korea’s people were not simply illiterate, but truly had no alphabet dedicated to their language.[7]

The Invention of Hangul 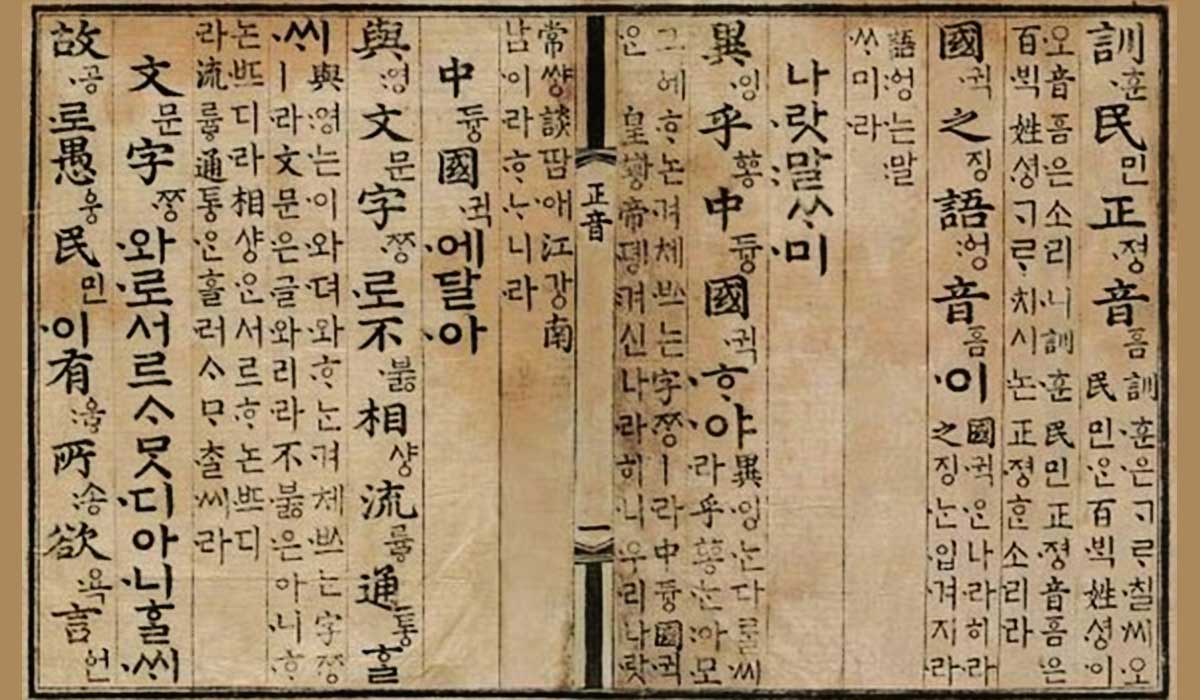 The name “Hangul” was given to the Korean alphabet in the early twentieth century. Before that, Sejong’s original name for the alphabet was “Hunminjeongeum”, which means “Proper sounds to instruct the people.”[8] This original name bears the weight of the importance which the new alphabet carried for the people of Korea. This importance can be felt in Sejong’s words from the original Hunminjeongeum text, written in 1446:

“The sounds of our country’s language are different from those of China and are not confluent with the sounds of Chinese characters. Therefore, among the ignorant people, there have been many who, having something to put into words, have in the end been unable to express their feelings. I have been distressed because of this, and have newly designed twenty eight letters, which I wish to have everyone practice at their ease and make convenient for their daily use.”[9]

All copies of the original Hunminjeongeum were thought to have been lost. However, a copy of the text was found in 1940. It had been preserved in an old home in Andong, Gyeongsangbuk-do, and is now held in the Kansong Art Museum in Seoul. This Haerye Edition printed edition contains two parts. The first is the preface, from which the above quotation is taken, and the alphabet itself. The second is the commentary on the alphabet written by the scholars of the time to aid in learning how to use it.[10]

Despite Hangul’s unfavorable reception by government officials, King Sejong translated popular poems and Buddhist scriptures using the new alphabet. As with much of history, the ruling class in Korea enjoyed the power that their unique position afforded to them. Their criticisms were fueled in part by the fact that Hangul would make it easier for the lower classes to become educated and communicate with one another.[11] This democratization of knowledge served to elevate the potential of all Korean people.

Why Hangul Is Unique

Hangul has been described as “the most ingeniously devised writing system that exists” by the late Scottish-American linguist James McCawley.[12] McCawley was even known to hold his own day of celebration to celebrate Hangul because he found the writing system to be so fascinating.[13]

Jared M. Diamond, a professor of physiology at UCLA Medical School, explains how Hangul’s unique relationship to the speaker’s mouth makes it a superior alphabet. Diamond points out the fact that Hangul actually matches its sounds to letters. By contrast he gives the example of the English alphabet in which the sound of a letter is usually poor, or haphazard. Diamond goes on to say that the shape of the characters as they are written on the page, are meant to resemble the shape in which the mouth, lips, and tongue are held when they are used to say that particular character.

In fact, Hangul is the only alphabet in the world which is known to determine the shape of its characters this way.[14] Consider the word “phone” in English, as an example of the contrary. The reader or speaker must simply memorize how to use the letters “ph” as an “F” when they are paired. Of course one might be able to look up the historical reasons why “ph” sounds like an “F”, but it can still be confusing. Hangul’s correlation between the shape of letters and their sound would have been incredibly helpful to a population learning how to use them for the first time. Indeed, this feature is still helpful for people learning to speak Korean today.

We cannot go over each letter in the Hangul here, so let us review the letters “ㄱ” and “ㄴ”. “ㄱ” sounds roughly like “K” in English. The vertical line in “ㄱ”, represents the back of the tongue being raised in preparation to make the sound of the consonant. “ㄴ” sounds roughly like “N” in English. In the case of “ㄴ”, the vertical line represents the tip of the tongue being held to the roof in the front of the mouth as the speaker prepares to make the sound.[15] 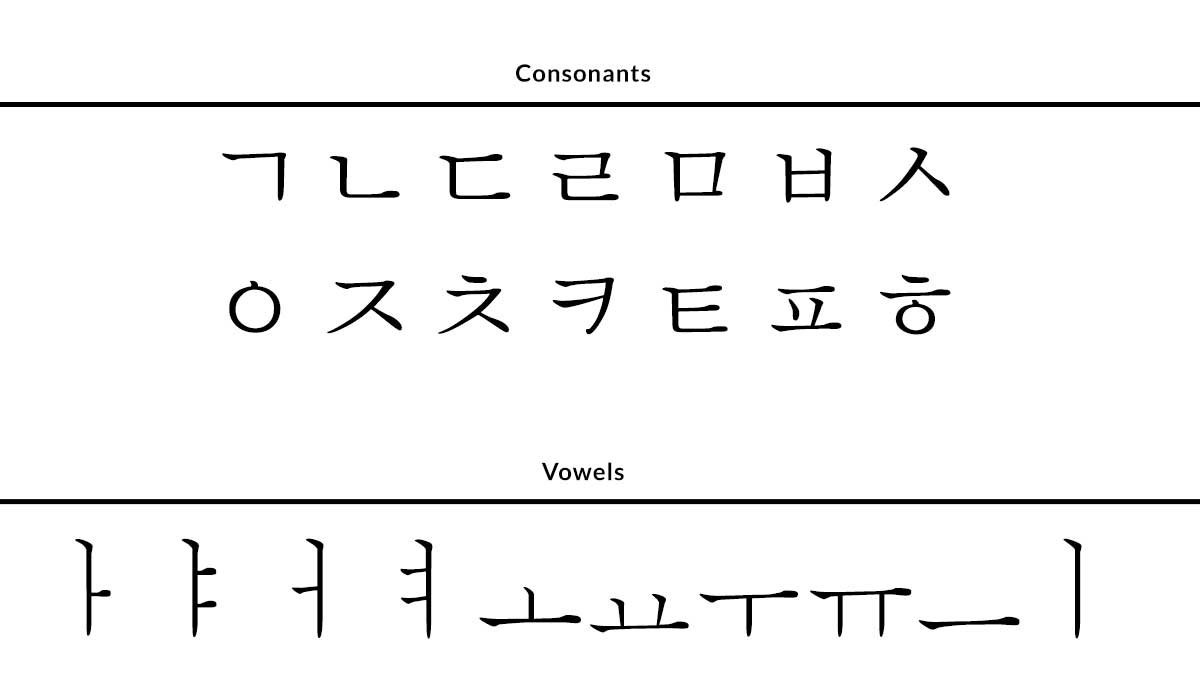 What’s more, the consonants in Hangul are grouped together by phonological similarities. Vowels are categorized into brighter sounds or darker sounds. The brighter sounds correspond with characters which are visually meant to represent the heavens. The darker sounds correspond with characters which visually represent the earth. It is difficult to imagine letters corresponding with philosophical principles in the present day. However, Sejong deeply valued Confucianism and science and wanted the alphabet to reflect these principles.[16] The three primary vowels of Hangul are “•”, which represents the heavens, “ㅡ” which represents the earth, and “l”, which represents a human. It’s easy to remember if you imagine it something like this: The vowel “•” looks like the sun in the sky. The vowel “ㅡ” looks like the earth’s horizon, and the vowel “l”, looks like a human standing upright.[17]

Lastly, the genius of Hangul, is in the way that syllables in a word are stacked into blocks. So, when the reader is looking at a word they’ve never seen before. they will know where each sound begins and ends. This is unlike English, and many other romance languages which simply require the reader to have memorized the pronunciation.[18] For example, the phrase “sunny day” would be “맑은 날” in Korean. The reader, knowing nothing of the pronunciation, can already see that the phrase is composed of 3 syllables.[19]

All of these elements come together to make Hangul a language truly designed for the people. King Sejong was the fourth ruler of the Joseon Dynasty and was posthumously given the title “The Great” for good reason. He ruled as the sole monarch from 1422 -1450. His efforts to systematize and deliver a simple alphabet to the people was motivated by goodness and carried out with excellence. Rather than fearing the people of Korea, Sejong empowered them and his legacy continues into the present time.[19] In fact, it is currently estimated that 97% of the Korean population is literate.[20]