How the Cherokee and Navajo languages survived European colonialism

While the precise number cannot be determined, around 300 Native American languages are purported to have once been spoken in North America when the Europeans arrived. These languages were “mutually unintelligible”. Meaning, these 300 respective groups could not speak to one another if they had so desired.[1] Each of these languages are tied to a unique cultural heritage, and deserve more attention than we can give them here. However, here we will look at two languages native to North America: Cherokee, and Navajo. This is partially because of these two languages’ current state of survival, which makes them easier to track through history. We will also examine these two languages because of the profound, if not unbelievable ways in which they’ve been used and preserved throughout American history.

Clashes Between Native Americans and Settlers 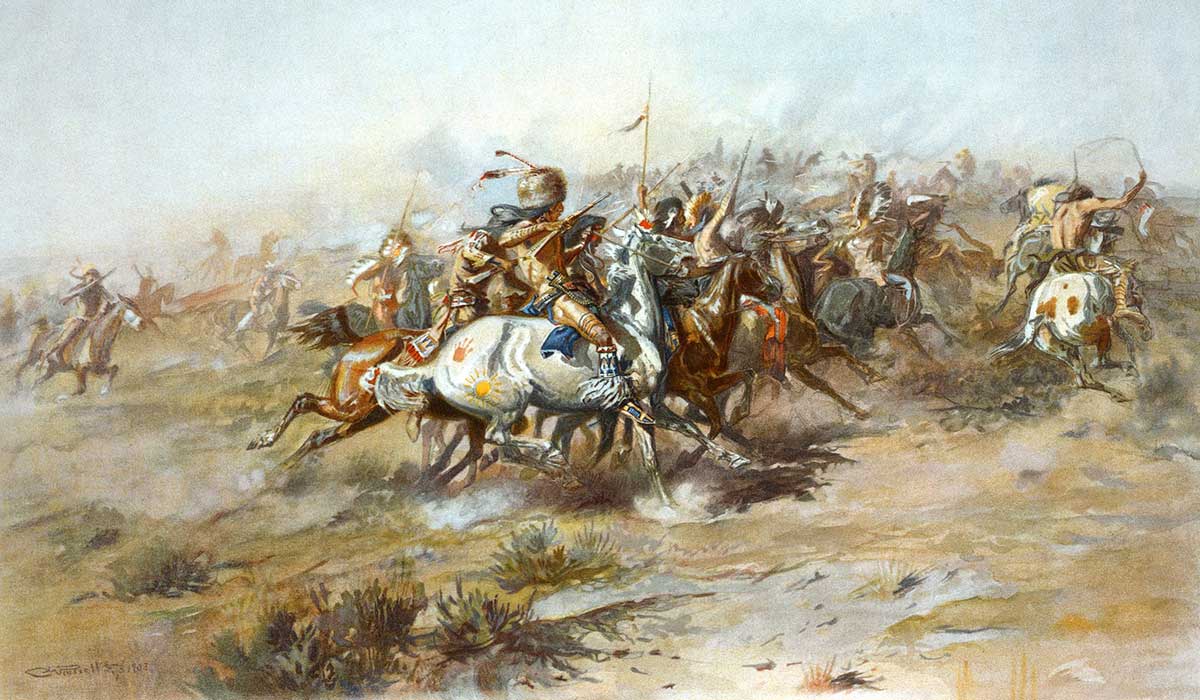 As white, European settlers began to make their home in what is now the eastern United States, they encountered Native Americans. This presented an infinite number of problems to white settlers who wished to use American land for their own purposes. In 1879, American military general, Nelson A. Miles, summarized the relationship between Native Americans and white settlers by saying: “…after nearly four hundred years of conflict between the European and American races for supremacy on this continent, a conflict in which war and peace have alternated almost as frequently as the seasons, we still have presented the question, What shall be done with the Indians?”[2] 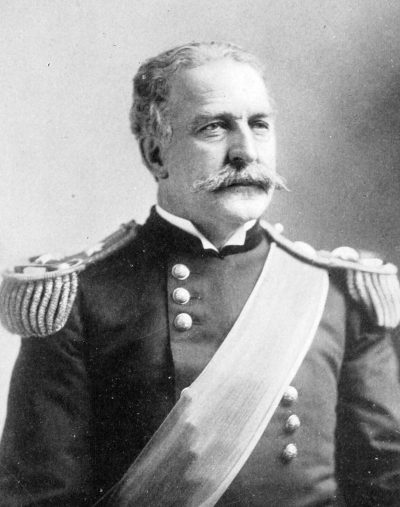 The earliest means by which white Europeans attempted to deal with what they called the “Indian Problem”, was known as the Plan of Civilization.[3] The perceived need to restructure the Native American way of life developed as white settlers began to move onto Native land, and wanted to use this land for their own purposes.[4] This Plan of Civilization was proposed by George Washington in the 1790’s and encouraged Cherokee people to adopt European customs such as individual land ownership and Christianity. This way, Cherokee people would learn English, assimilate to European customs, cease hunting on large swaths of land and give up their land to the Europeans, gradually and peacefully.[5] 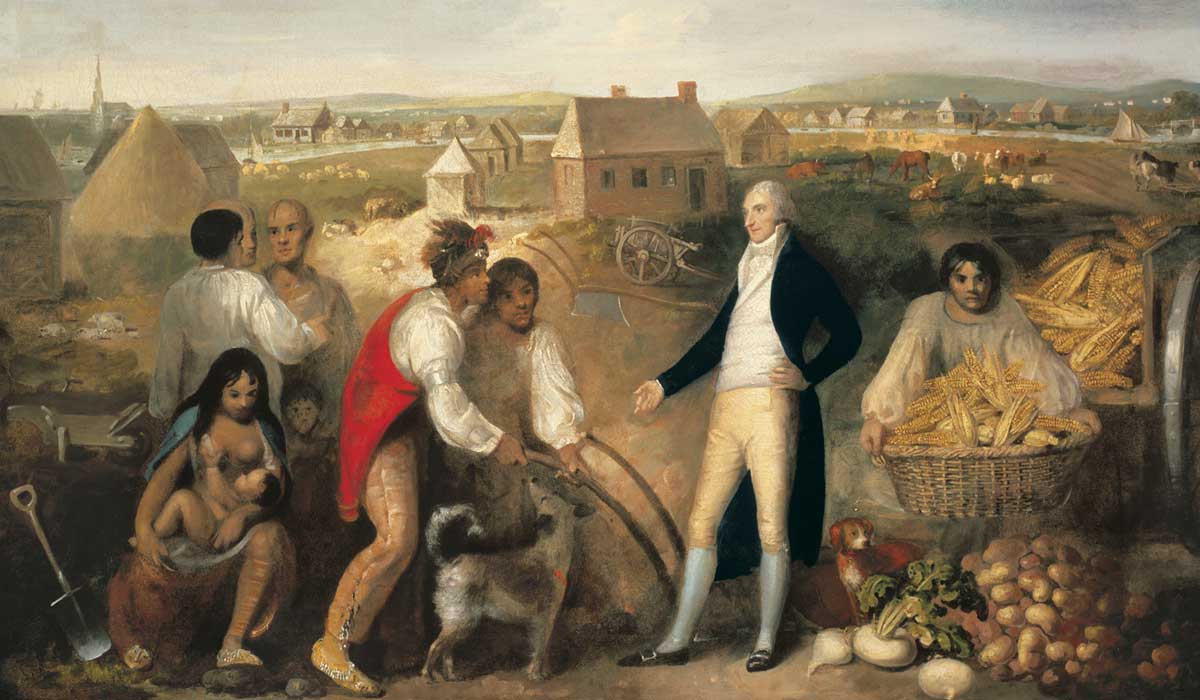 What followed in the years to come, was not peaceful. By 1830, gold was discovered on Cherokee land making it even more valuable. Tensions mounted between white settlers and the Cherokee people which resulted in The Indian Removal Act.[6] The Cherokee people were divided as to whether they should fight for their land, maintaining an identity strictly associated with a particular location, or attempt to preserve their identity by instilling it in the hearts and minds of its people. Ultimately, in 1838 federal troops and state militias began to violently round up Cherokee people, forcing them to march west, from the southeastern U.S. to present day Oklahoma. This march is known as the Trail of Tears and thousands of Cherokee people died during this forced relocation.[7] 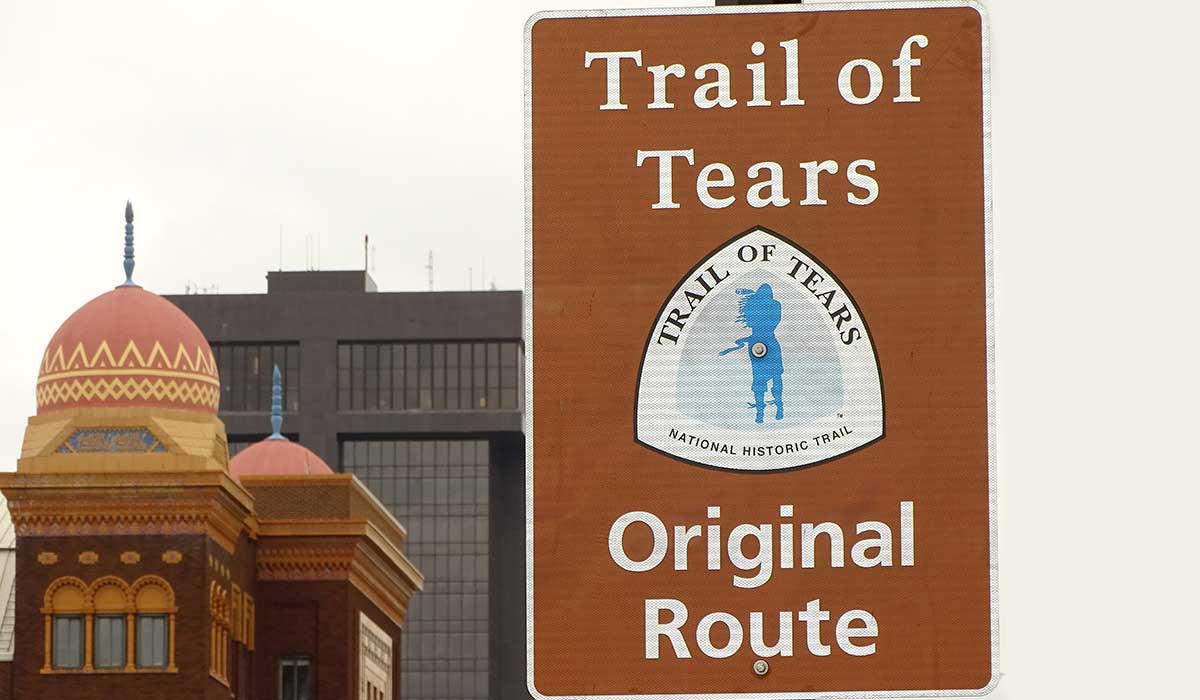 By 1868 Congress assembled the Indian Peace Commission which was supposedly “An Act to Establish Peace with Certain Hostile Indian Tribes.”[8] However, federal practice at the time is characterized by this quote from the report of the Indian Peace Commissioner: “Schools should be established, which children should be required to attend; their barbarous dialect should be blotted out and the English language substituted.”[9]

By the 1870’s, the United States began assimilating Cherokee children in boarding schools by removing them from their families, forbidding them to speak their language, and forcing them to practice Christianity. Children in these boarding schools were closely controlled. If they were found to be speaking in their native language or practicing their native culture, they were confined, refused privileges and beaten.[10]

Cherokee and How It Survived 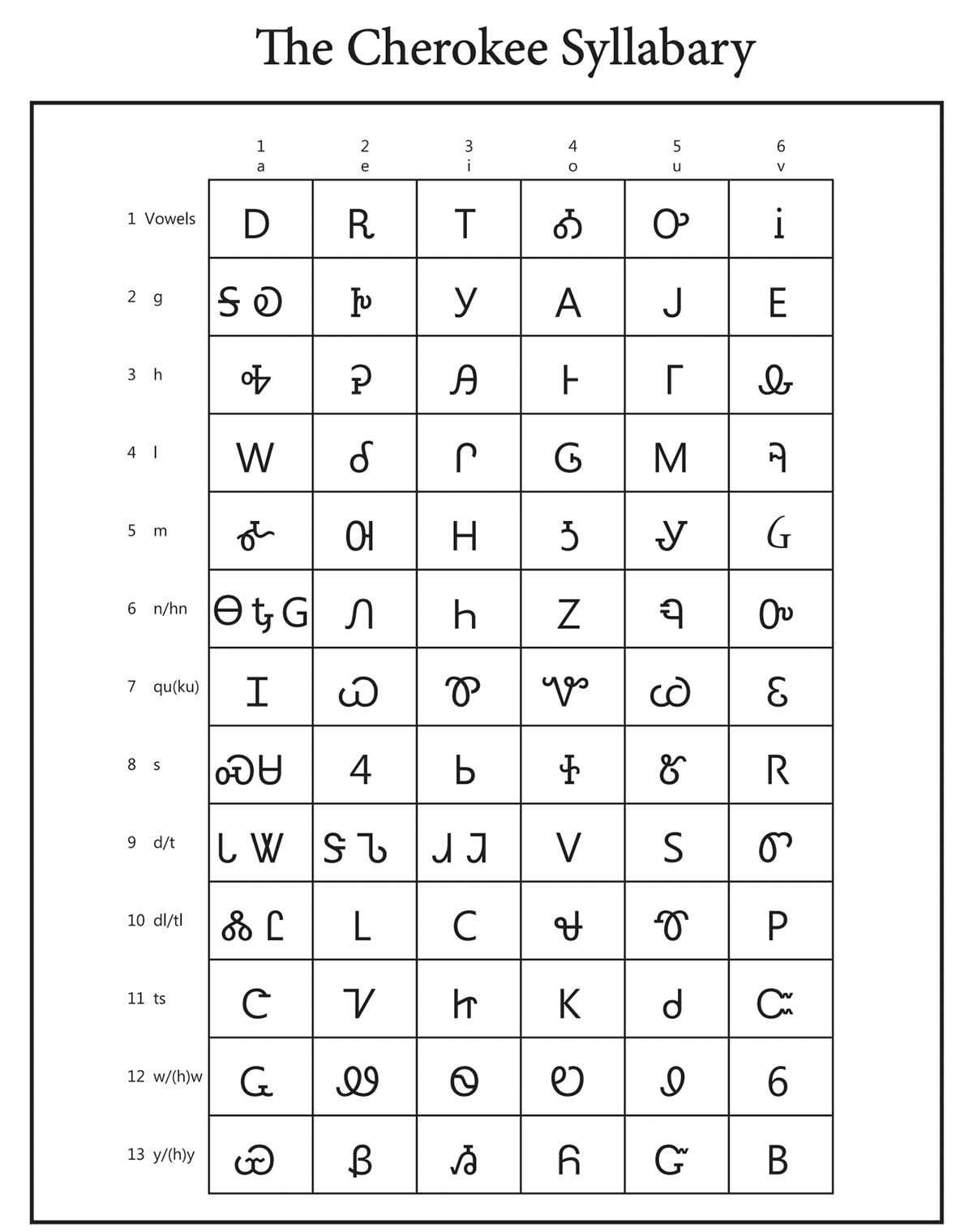 The Cherokee language began as an Iroquoian language. The family of Iroquoian languages were known to have been spoken around the Great Lakes, and consisted of 16 languages. [11] Linguists estimate that the Cherokee people separated from the other Iroquoian people 3,500 to 4,000 years ago.[12] When Europeans arrived, the Cherokee had made their home amongst the states now known as North Carolina, South Carolina, Tennessee, Virginia, Kentucky, West Virginia, Georgia, and Alabama.[13]

As efforts to assimilate and displace the Cherokee people gained more momentum, a paladin of the Cherokee people arose by the name of Sequoyah with a new idea. Sequoyah was witnessing the erosion of his own Cherokee culture, while at the same time, watching white Europeans succeed in their conquest. He reasoned that the settlers’ success was attributable to their written language, which enabled them to communicate effectively in a way that was not dependent on memory, or word of mouth.[14] As a result, Sequoyah began developing a written form of the Cherokee language in 1809 in hopes that a written language would allow the Cherokee people to maintain their independence among the white settlers. 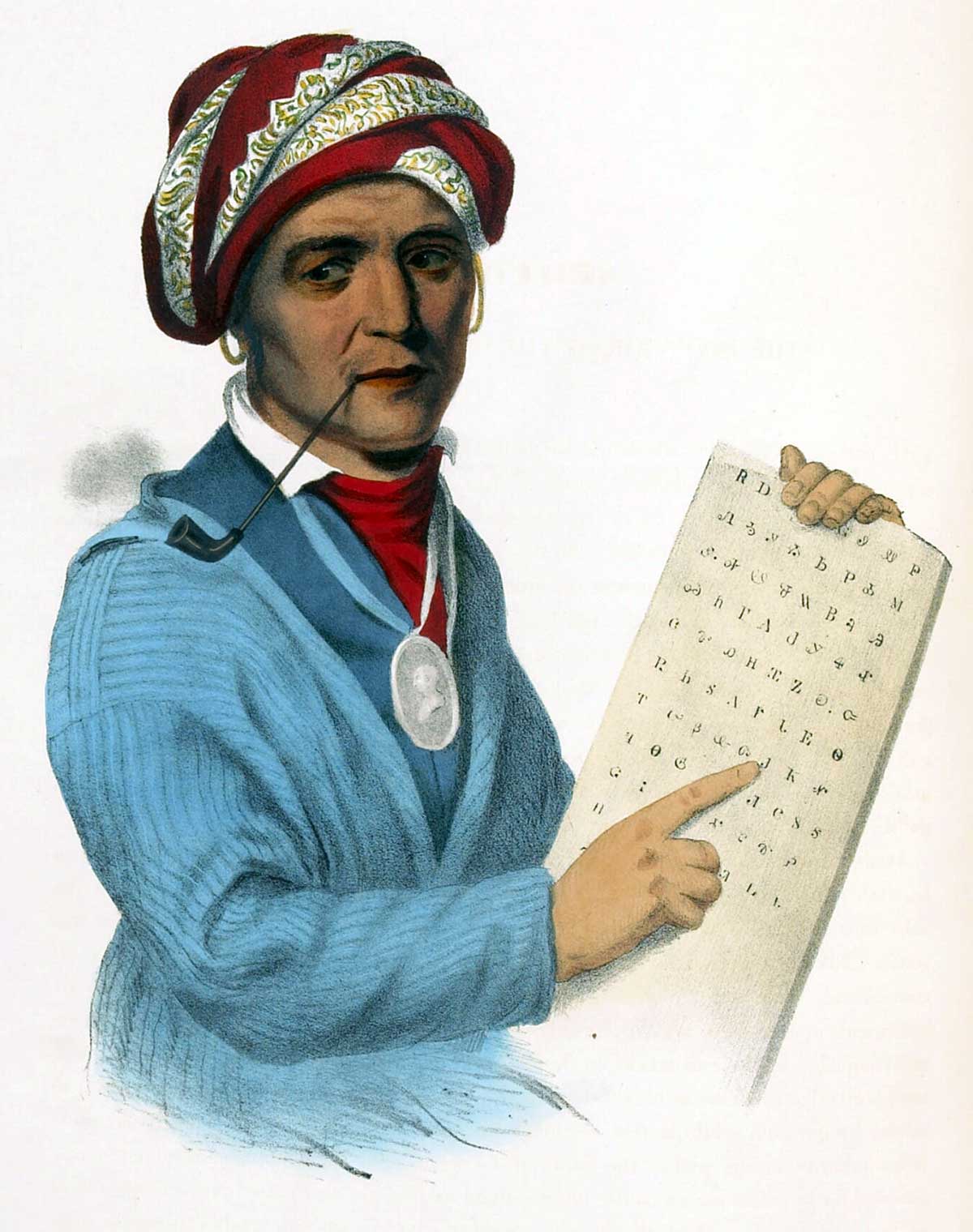 Sequoyah adapted letters from Hebrew, Greek and English, identified all the syllables of the Cherokee language, and created a system of 86 symbols by 1821.[15] The Cherokee language, or “Tsalagi Gawonihisdi”, was taught to many of the Cherokee people that would eventually be forced to migrate to Oklahoma and played a vital role in preserving Cherokee heritage and language. The invention of a written language, from scratch proved to be the first written syllabic form of a Native American language.[16]

As white European settlers moved further west, they became determined to acquire more land, once again necessitating the displacement of Native Americans. Much like the genocide which culminated in the Trail of Tears for the Cherokee in 1838, the Navajo people were forced to leave their land, less than thirty years later in 1863 and 1864. The forced relocation of the Navajo is now known as The Long Walk of the Navajo, or the Long Walk to Bosque Redondo. 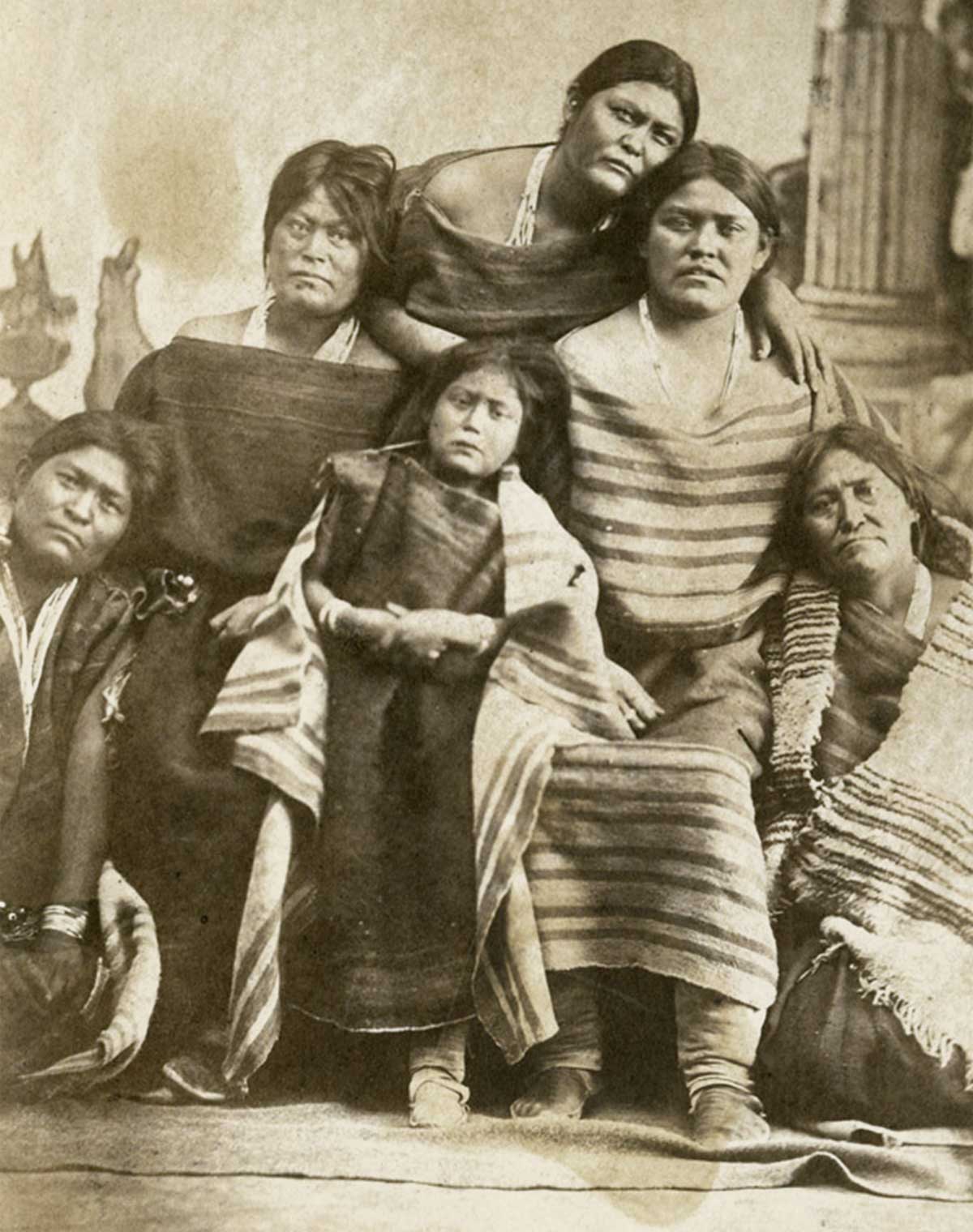 Navajo women during long walk of the Navajos, Public domain, via Wikimedia Commons

The Bosque Redondo was the 40 square mile area west of Oklahoma, which the Navajo were forced to inhabit. The plan set forth by the U.S. government for the Navajo, was much like the plan for the Cherokee before them. The Navajo were to be converted to farming and Christianity in an effort to civilize the group. The Bosque Redondo was a desolate piece of land with nearly undrinkable water, which resulted in the illness and death of hundreds of Navajo people.[19] 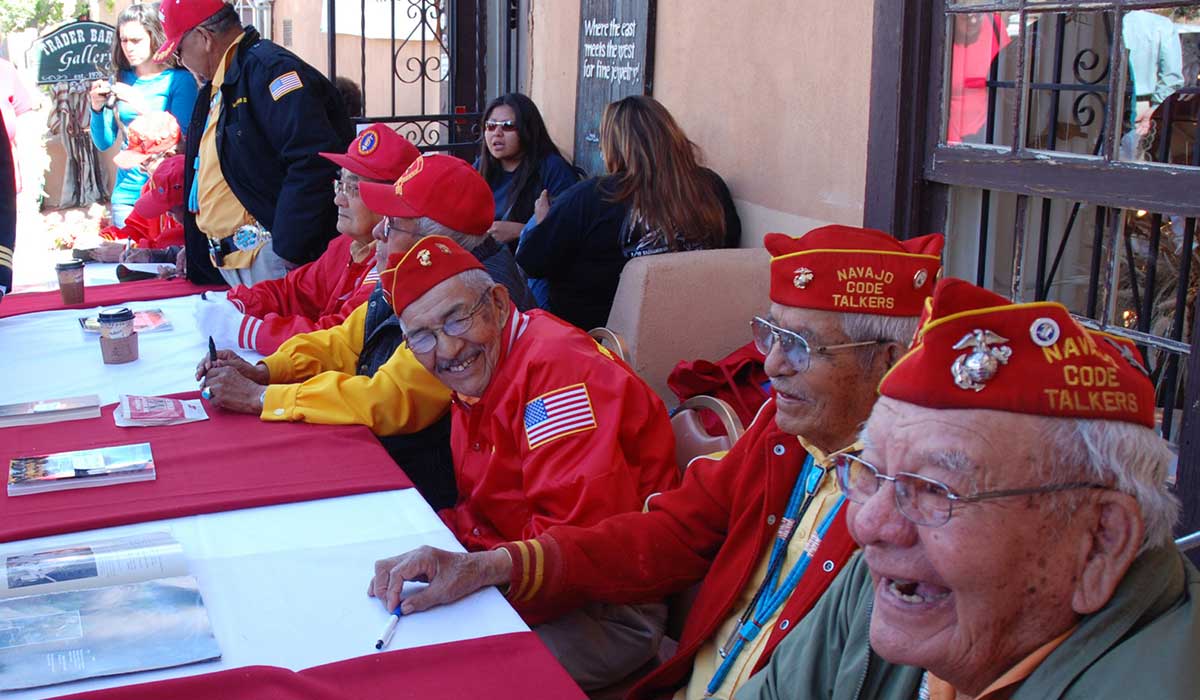 What follows is fascinating in its own right, but also shocking in light of  the tense relationship between the U.S. government and the Navajo people. During World War II, the U.S. military was in need of a coded way to communicate their plans.[20] This was because the Japanese repeatedly broke the codes the U.S. military created.[21] The U.S. Marines needed a way to strategize and move across the Pacific Ocean without being detected, so they commissioned 29 Navajo Marine recruits to develop a code that the Japanese could not break. They were known as the Navajo Code Talkers. The code these men developed not only remained unbroken, but proved to be the fastest and most accurate code used during WWII.[22] By the end of WWII, the code consisted of a total of 411 words.[23] It has been argued by multiple historians that the Navajo code talkers provided the secret weapon which helped the U.S. win WWII.[24] 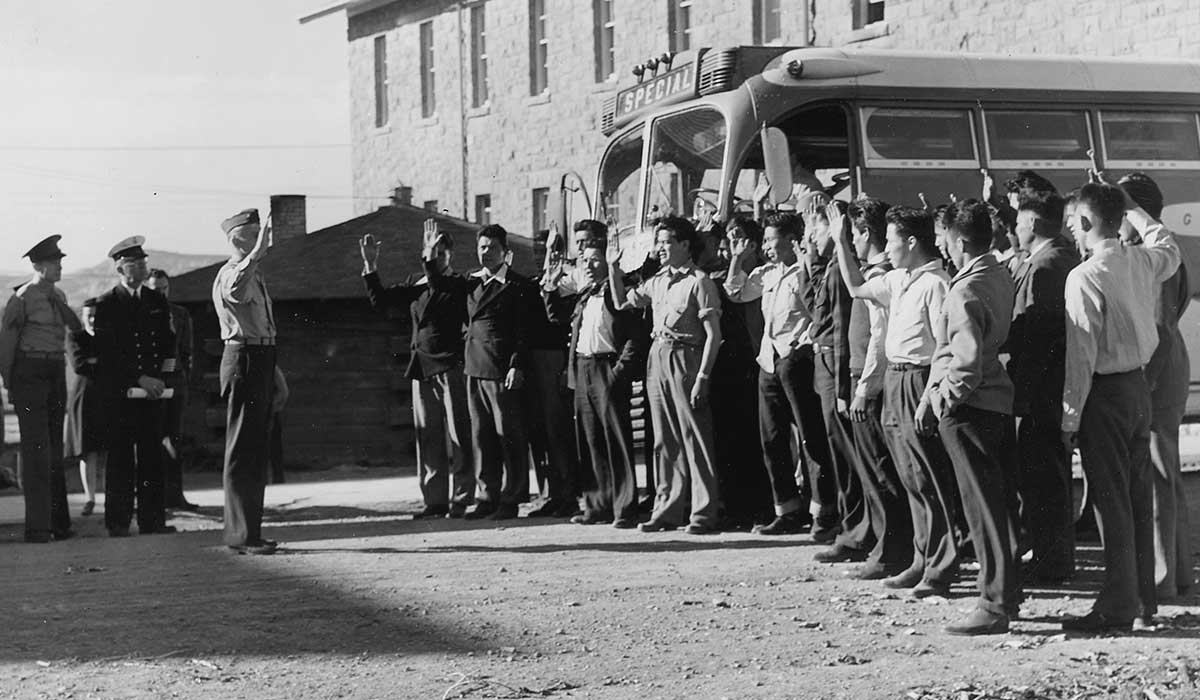 Effectively, the United States Government benefited from the Navajo Code Talkers despite the fact that it had attempted to eradicate the language only 80 years before. There is undeniable irony in the fact that the United States’ victory in WWII was attributable in part, to a group of people they tried to erase. Luckily, the Navajo language was far from erased. As it stands today, the Navajo language is the most commonly spoken Native American language in the U.S. with around 170,000 speakers. [25]

As it regards both Cherokee and Navajo, there are multiple programs to help people who want to learn these languages.[26][27] The Navajo language is not nearly as endangered as the Cherokee, but neither language is flourishing the way they would have, if it had not been for the colonization of white Europeans. Thankfully, efforts to execute the genocide of these people were not entirely successful.