How to cheat at Wordle, Scrabble and other letter games

Wordle is the latest word game to captivate the hearts of humanity. If you haven’t played it yet, Wordle is a fun, simple, and free word game. It’s so easy to begin playing, you don’t even need an app. Between the low barrier of entry, and the fact that there are no ads, Wordle has infected the hearts of millions. Chances are, if you can talk or read, you’ve probably played a word game before. Wordle might be new but letter games in general are as old as words themselves.

Later on, we’ll show you how to beat your friends in online word games. For now let’s look at the roots of the phenomenon.

Anagrams are a very early example of something like word games. An anagram is when the letters in a word are rearranged to create another word. An example is the word sword which can easily be rearranged to say words.

One of the earliest recorded anagrams in written history comes to us from around 300 B.C.E. The Greek poet Lycophron rearranged the letters in the names “Ptolemy Philadelphius” and “Arsinoe”, who was Ptolemy’s wife, the queen in his poem about the siege of Troy.

Palindromes, like anagrams, have also managed to capture humanity’s attention since antiquity. A palindrome is any word that is the same when it’s read backwards or forwards. A simple version is the word wow. More complicated versions are redivider and racecar.

The Sator Square was bound for fame with its combination of anagrams, palindromes and cryptography. In fact, it is thought to be both one the world’s first palindromes or anagrams. The oldest Sator Square dates to the first century C.E. and was discovered in 1936 on a column in Pompeii, Italy. If Pompeii was buried by a volcanic eruption in 79 C.E., then this Sator Square is at least that old.

The Sator Square is a 5×5 grid containing five Latin words that can be read the same way both forwards and backwards. The words are: SATOR, AREPO, TENET, OPERA, ROTAS. What’s mystifying about the words however, is that when they’re read from top to bottom, or left to right, they maintain their structure. The sentence’s meaning is enigmatic. The most widely accepted interpretation is “Farmer Arepo works his wheels / plow”. The Sator Square is the subject of continued debate. Some scholars argue that it contains cryptic Christian meaning, and other scholars argue for Jewish, Mithraic or Ancient Greek origins.

Whatever the case may be, the Sator Square can be found all across Europe. There’s one in the Basilica di Santa Maria Maggiore in Rome. It was also found in a painted section of wall plaster from an ancient Roman home in Cirencester, England. In fact, it is scattered among Roman ruins in France, Hungary, Portugal, and even Syria. Whatever its interpretation or meaning may be, the widespread use of the Sator Square speaks to humanity’s fascination with wordplay and the potential meaning it carries. 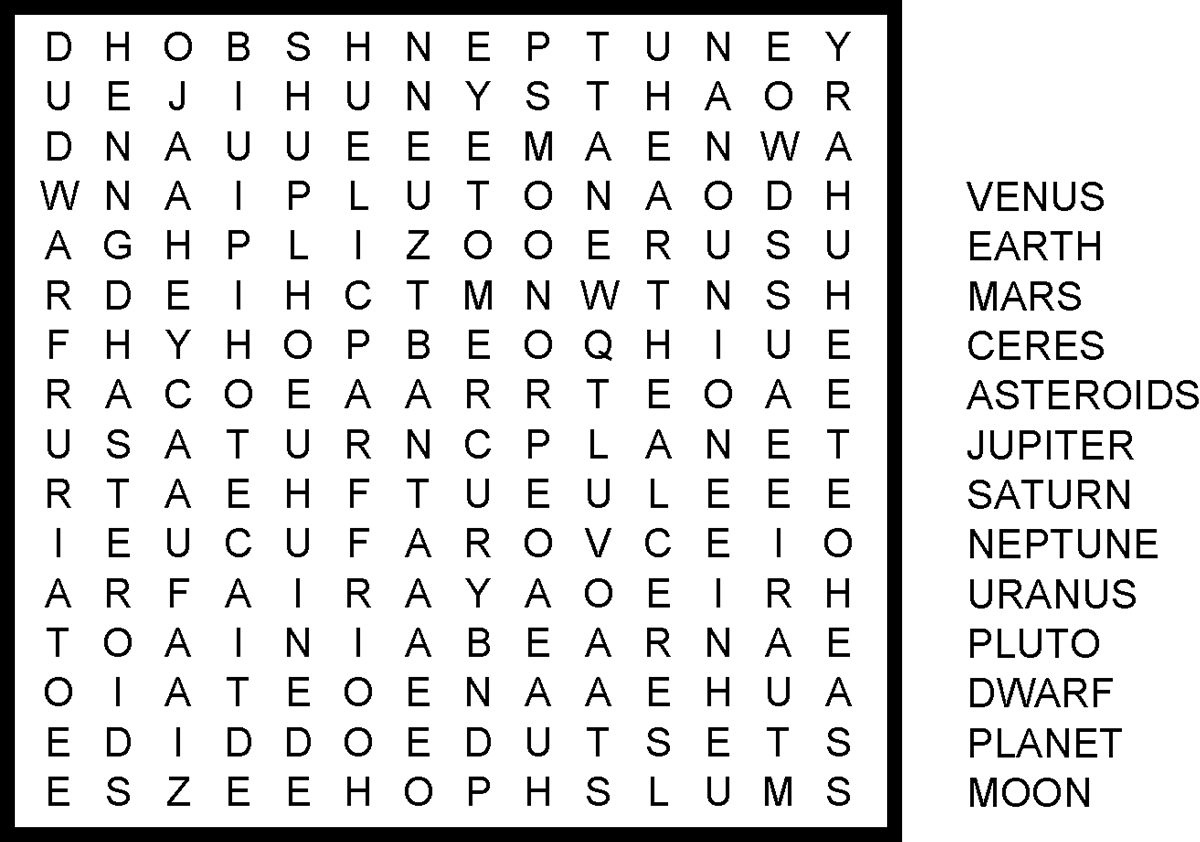 Some of the most common word games you can think of seem to have been created more recently than one might imagine. The word search for example, was first created either in the U.S. or in Spain. The location is contested, but in both cases the word search would’ve been created in the 1960’s, which really isn’t so long ago.

Crossword puzzles weren’t invented until 1913 in a story not entirely unlike that of Wordle. The Editor at the New York World, Arthur Wynne only created the puzzle to fill space in the FUN section of the Christmas edition of his paper. You can still play the world’s first crossword puzzle! The shape is slightly different, but the rules should be familiar.

The invention of the smartphone allowed for the confluence of word-based games and the internet. The intersection of those two rushing rivers meant people could rearrange words (which we’ve loved for millennia), with millions of people from around the globe. The total revenue for word-game apps on smartphones was around $850 million, worldwide in 2017. This figure is a combination of money made by advertisements and in-app purchases. By 2021 this number reached well over $2 billion and is projected to climb above 3 billion by 2026.

How to Beat Wordle

The name “wordle” itself is sort of a puzzle. It’s a reference to  the owner’s name, which is Josh Wardle. See what he did there? Wardle is a software engineer located in Brooklyn, NY. He created the game in 2014 for he and his partner simply because he knew she loved word games. Wardle set the game aside however, and didn’t give it his full attention again until later. After sharing it with his friends and family, the game enjoyed explosive success by 2021.

One of the best things about Wordle is that there are no advertisements! The game is terribly addictive because you can only play once a day. This is because there’s only one possible solution per day. So, it feels a bit like the crossword puzzle in your morning paper. 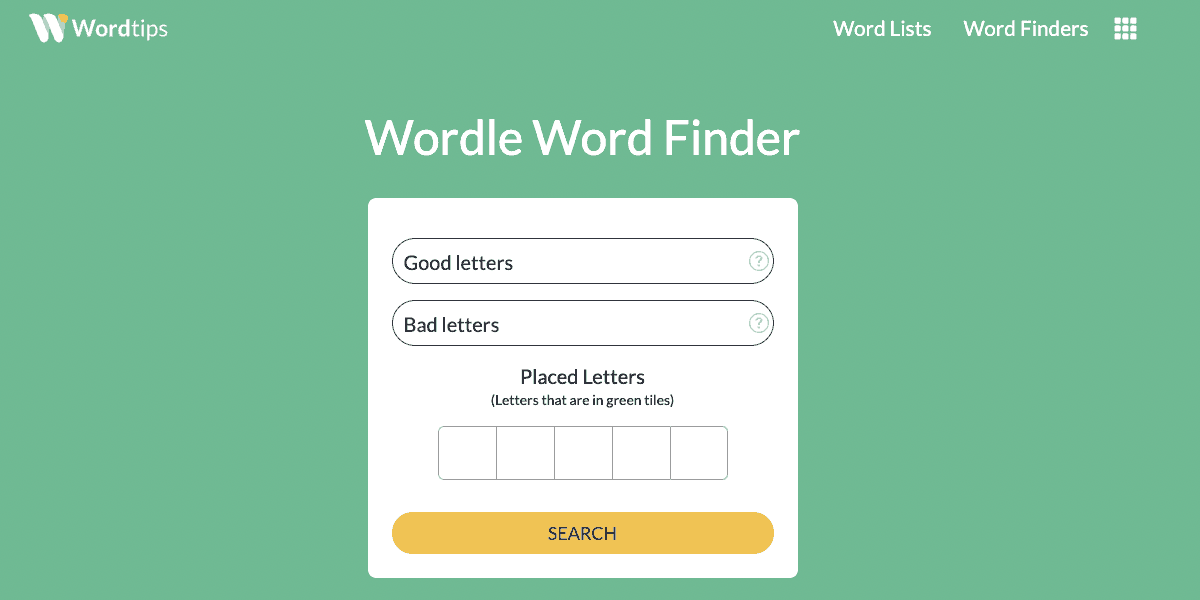 Word Finder for Wordle, Scrabble and Words With Friends

It is fairly common to see friends posting the results of their Wordle games on social media. So, if you want to impress your friends without thinking very hard, you can use this Wordle word finder. To fool your friends into believing you’re a genius, just enter the good letters you’ve already discovered from your first guess into the site. You even enter the correct letters into their proper location on the provided grid to get you one step closer. With that information, the word finder provides you with all the possible words given the letters you’ve entered.

As a side note, if your girlfriend, friend, or child wants to play Wordle but you’ve already played and they can’t log onto the site; use Google Chrome’s incognito mode. This gives multiple people the opportunity to play on the same phone or computer, so long as they don’t boast too quickly and spoil the fun.

How to Beat the New York Times Spelling Bee

The New York Times Spelling Bee is a random assortment of 7 letters. The letters are arranged into the cute shape of a honeycomb, although this shape has nothing to do with the way the game is played. The player is meant to create words that have a minimum of 4 letters, but up to 7 letters. The less failed attempts you make to create words, the better your ranking will be. So, if you get frustrated and just type “YHX” because you want to know if that somehow became a word overnight, you will be perceived as less of a genius. 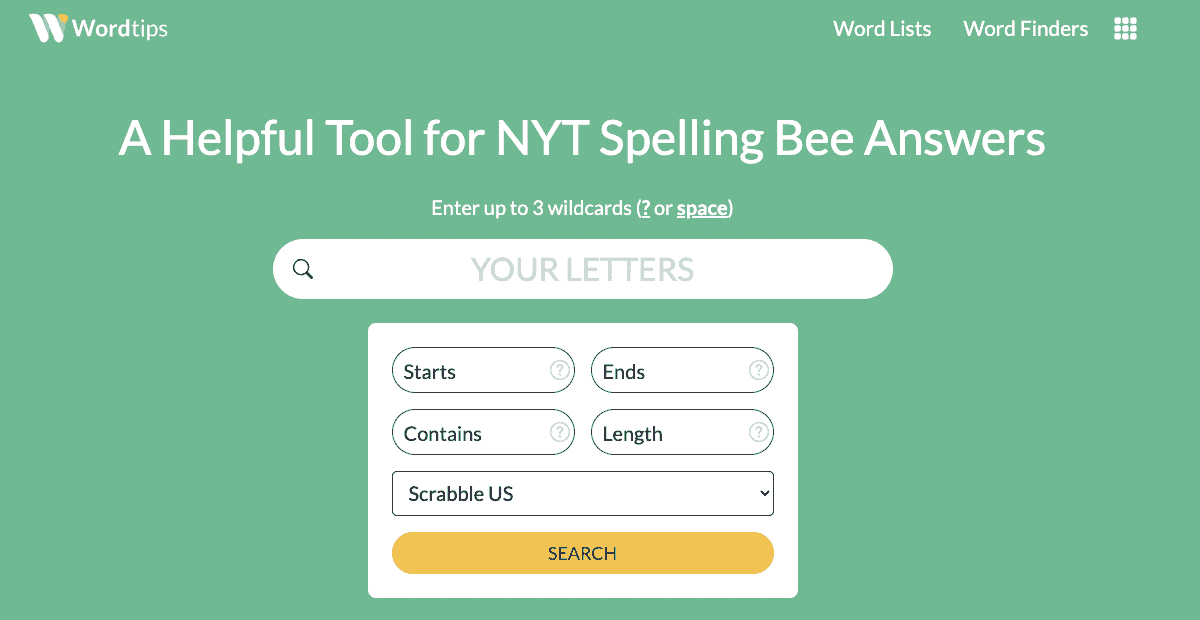 However, if you want to show your computer who’s boss, you can use this tool to generate answers. All you need to do is enter your random assortment of letters, and the tool will reveal all the possible words that can be created with those letters.

The NYT spelling bee can sometimes be frustrating because it asks you to subscribe to the website. If you want to keep testing your word-making abilities, but don’t want to subscribe, you can use Google Chrome’s incognito mode to continue playing.

How to Beat Scrabble and Words With Friends

If you’ve already played your one round of Wordle today, you may have to consign yourself to a blast from the recent past and play Words with Friends or Scrabble. The two games are almost exactly the same. Players are given 7 random letter-tiles to form words on a grid pattern. Some letters and words are worth more points than others, and some locations on the board are worth more than other locations.

Words with Friends was one of the first word games to see booming popularity via smartphone. It was created by two brothers, Paul and David Bettner, who had no idea what the game would become. Then, on October 5th 2009, John Mayer tweeted that “Words with Friends’ is the new Twitter.” The two brothers watched the popularity of their game literally explode by the minute because of the unsolicited advertisement of the famous songwriter. The success of Words with Friends is due in part to the fact that it can be played with your actual friends. Players can either search for their friends by the username, or on Facebook. 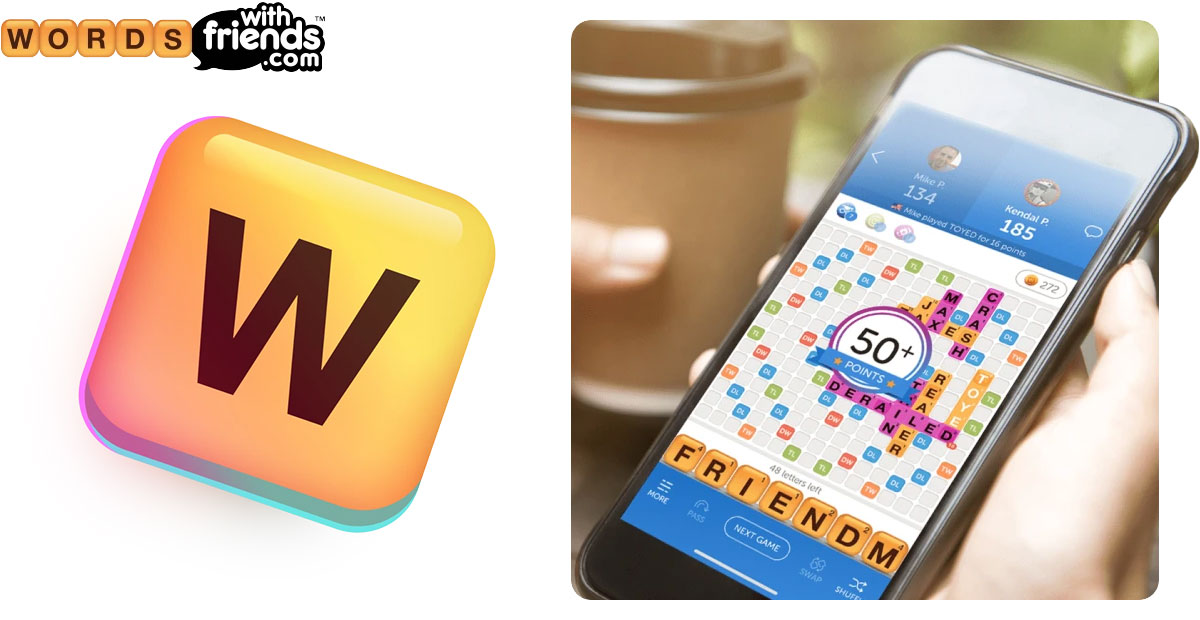 Scrabble GO is the current, smartphone version of the original Scrabble. Scrabble, was originally invented as a board game in 1931, and still remains a household name amongst many families in the U.S. and the U.K. However, the likely reason Scrabble never saw the same online success as Words with Friends is probably because it lacked the social element. Not to mention the accidental endorsement of a superstar.

Here’s how to win in Scrabble or Words with Friends. If you don’t feel any moral objection to cheating, these online tools will help you form words from the most obscure combination of letters. This word finder allows players to enter their tiles, and produces valid word options. Enter your letter tiles into this word unscrambler and find the word with the highest possible score from the tiles you’ve been dealt by the internet-gods. 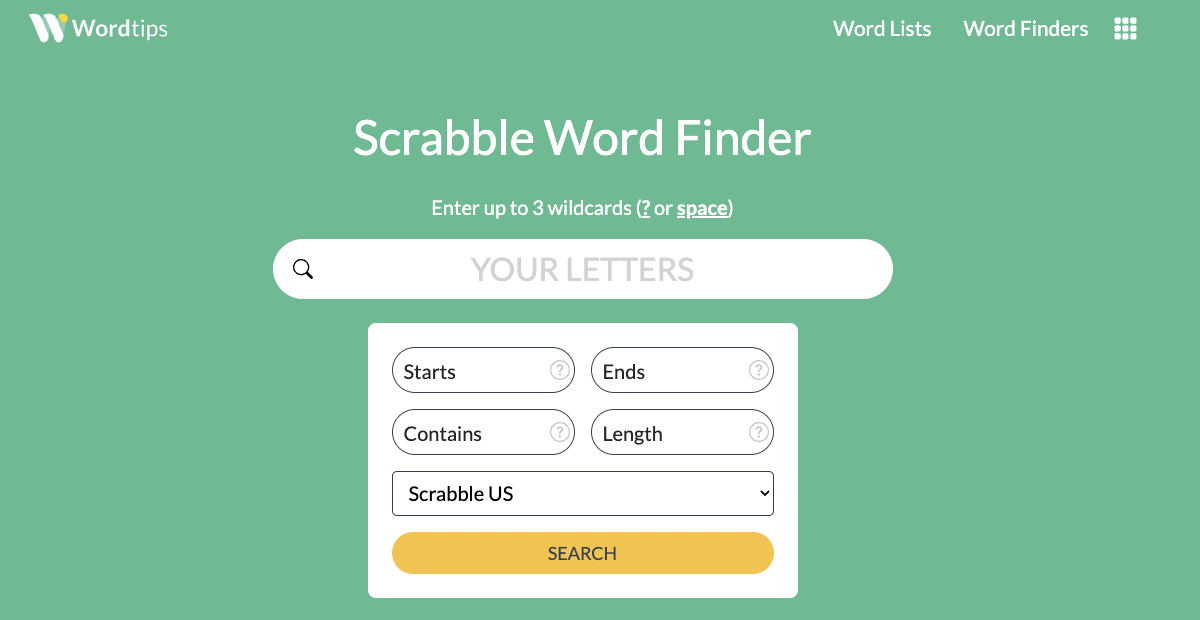 Both the finder and unscrambler, have options for you to select if you’re playing Words with Friends or Scrabble. Players can even select whether or not they want a U.S. or U.K. Scrabble dictionary. If you’re brave enough, you can even use these tools to cheat in an old fashioned game of Scrabble. Although, multiple trips to the bathroom might eventually become suspicious in the middle of a game. You may also have to endure some intense questioning to explain how you know the word duncish means “Slow to learn or understand; stupid, unintelligent.”

Whether you’re a child learning how to spell, or you’re stuck at home during lockdown, word games are fun for everyone. This fascination seems to be as old as written alphabets and judging from the current statistics, will be popular for as long as humans use words. For now, the craze that’s captivated our attention is Wordle, but surely another game will come along any day now. The simplest games tend to have the most viral effect, maybe you’ve got the next infectious idea.