What Is The Income Requirement For A Green Card Sponsor?

If you are filing an Affidavit of Support (Form I-864) you may need to provide some documents. The following are some examples of documents that may need to be submitted by sponsors:

According to USCIS, if you submit a document with information in a foreign language, you must also submit an English translation. To guarantee that your I-864 is processed quickly it helps to use a certified translator.

You can order a certified translation of these documents from our online store:

In this guide we answer many questions about the income requirements for a green card sponsor:

What Is The Minimum Income Required Of A Green Card Sponsor?

If someone is planning to immigrate to the U.S. and apply for a green card, they need to have a financial sponsor. The sponsor agrees to financially support the person applying for the green card by signing an Affidavit of Support.

The minimum amount of money a sponsor needs to make depends on three things:

How Do I Count The People In My Household?

The number of people in your household includes the following:

What Qualifies As A Source Of Income?

Usually, a sponsor’s yearly income is the same amount of money they reported to the IRS in their most recent federal income tax return. This can include wages, salaries, commissions, fees, tips, fringe benefits, stock options, retirement benefits, alimony, child support, dividends, and any other legal income.

Can I Count The Yearly Income And Assets Of Relatives In My Household?

Yes. If the sponsor cannot meet the minimum yearly income mentioned above, they can include the income and assets of relatives in their household under these conditions:

Can I Count The Yearly Income Of People Who Are Not In My Household?

If the sponsor and their household cannot meet the income requirements, they can use a joint sponsor. The joint sponsor’s income must be at least 125% of the U.S. Federal Poverty Guideline on their own. They cannot combine their income with the sponsor.

Can I Count Yearly Income Of The Person I Am Sponsoring?

The income and assets of the person applying for a green card can be counted under 3 conditions. First, they must be the sponsor’s relative. Second, the immigrant’s source of income must remain the same after they obtain their green card. Third, the immigrant must live with the sponsor.

What If My Income Is From A Foreign Country?

Sponsors who live outside the U.S. and are employed outside of the U.S. can only count their income under a few circumstances.

Can I Include My Assets If My Income Is Not Enough?

If the sponsor cannot meet the income requirements by using their own income and the income of the members of their household, they can count their assets. These other assets are things like money in savings accounts, stocks, bonds and property.

There is one exception worth noting:

Can I Count My Relative’s Foreign Assets?

If the person who is applying for a green card has assets in another country you can include that value. Some examples of assets might be real estate or other personal property. The value of these assets can be included under these conditions:

What Is Five Times The Difference Between the Sponsor’s Income and The Minimum Income Requirement?

Where Can I Get a Certified Translation?

You can order a certified translation of these documents from our online store:

Order now
Get a free quote

You can order most translations 24 hours a day, 7 days a week through our online store. For large projects (more than 20,000 words or 50 pages), please request a quote.

Can you expedite my translation?

Yes, we apply a surcharge of 50% to expedited translations and it is a service we offer for most common language combinations.

With expedited service we can reduce the delivery time by approximately 50%. If your document is only 1 page, we can often provide same day service.

How do you keep my information secure?

All your information is transmitted using SSL/TLS encryption.

U.S. Language Services has a strict confidentiality policy. We understand that in certain cases, given the sensitivity of the information to be translated, some clients require we sign a specific confidentiality agreement (NDA). We would be happy to sign your NDA.

Who will translate my document?

Our translators have years of experience in the translation industry and specialize in different areas of service. Many of them have graduate degrees and certificates in fields such as law and engineering.

How can I pay?

In what currency are your prices?

All prices — both in the online store and in quotes sent via email — are indicated in U.S. dollars (USD).

Is my payment safe?

Yes. We use Stripe and PayPal as payment platforms. We never receive, store or keep your credit card information.

What is a certified translation?

A certified translation is a word-for-word translation required for official use by U.S. Citizenship and Immigration Services (USCIS), universities, colleges, state or federal institutions and courts.

All our certified translations are issued in accordance with the regulations established by the USCIS, the institution that most frequently requires this type of document. A certified translation includes a certificate issued on our corporate letterhead signed by the translator and a U.S. Language Services representative in PDF format.

How much does it cost?

The price for a certified translation is $29.00 per page. No hidden fees.
Each page may contain up to 250 words or fewer including numbers. Pages may be letter size (8.5″ x 11″), A4 or smaller and one sided.
For languages that use logograms, such as Chinese, Korean and Japanese, each character is considered a word.

How are the pages counted?

When you order a certified translation, the most significant variable is how the pages of the document are calculated. We take into consideration both the number of physical pages in your original document and the total word count.

What happens if I don’t count the number of pages correctly?

Don’t worry. Our team reviews each order individually. If the number of pages is greater, we’ll contact you with instructions on how to proceed. If you ordered pages in excess, we’ll issue you a refund using the same payment method.

How long will it take to translate my document?

For most common languages, including Spanish, French, Portuguese, Russian and Chinese, you can expect to receive a 1-3 page translation in 1 business day. Larger projects (4 – 10 pages) can take up to 3 business days.

For orders in other language pairs, our team will review your documents and provide you with the delivery date once you place your order.

Do you offer notarized translations?

No, we do not offer notarized translation services.

How much does it cost?

The price for a standard translation is $0.12 per word. No hidden fees.
For languages that use logograms, such as Chinese, Korean and Japanese, each character is considered a word.

Is there a minimun?

What is a standard translation?

A standard translation is a high-quality, professional translation of documents or text-based files delivered in an editable Word file. If you require a different format (pages, rtf, txt) just let us know when placing your order using the comments field. This service is perfect for:

How do you ensure quality?

Our translators have years of experience in the translation industry and specialize in different areas of service. Many of them have graduate degrees and certificates in fields such as marketing, law and engineering. We’re very selective and accept less than 10% of the translators that apply.

A typical translator working for U.S. Language Services has over 5 years of experience and is fluent or bilingual in English and the source or target language.

What languages do you translate?

U.S. Language Services provides translation services in 35 languages. We translate both from English and into English:

How long will it take?

For most common languages, including Arabic, Chinese, French, Portuguese, Russian and Spanish you can expect to receive:

For orders in other language pairs, our team will review your documents and provide you with the delivery date once you place your order. 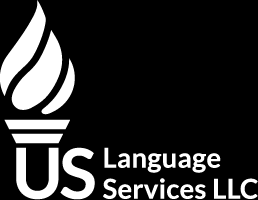 Get a free quote

Please provide us with your contact information and upload your documents. All the information transmitted is secure.